Secret Santicorn came up again on the OSR discord, but this time around, I have a functioning blog to post things on and no school to get in the way. So, here's my writeup for @annowme's prompt of "d66 short, utility-only spells". Annowme, I hope you like them!


The prompt specified "utility-only", which I decided to use as a constraint to write spells with as limited combat utility as possible, however, I'm sure that a smart player could find some sort of use for all of them, and as things went on, I found it harder and harder to not think of combat situations, so the latter half of the list does have some. A fair number of them ended up somewhat tech themed, but the names could be tweaked for a less gonzo game. They are all written to be system neutral, and I wasn't sure on some of the specifics cause I figured the gift recipient may want to tweak those to their preference, or have them scale somewhat.

All spells are assumed to be level 1 spells, or in a system without leveled spells, they can be somewhat improved on with more dice/power invested. Unless otherwise specified, the durations are all 10 minutes.

This post is made for the parasite contest hosted on the OSR Discord server. The other participants, and their blogs, are:
Micah, RTX, Ambnz, Lexi, Type1Ninja, wr3cking8a11, Oblidisideryptch, Wizard, and James Young.

The challenge was to make a GLOG class in a week for a parasite race-as-class. I know many of the participants went for something unique, but I decided to go for something classic. I was mostly inspired by the Venom symbiote, but this old flash game from newgrounds kept coming to mind as well. In The Visitor, you play a tiny worm-like alien thing, hopping from body to body and mutating into their forms to solve puzzles. I liked the idea of a class that can hop bodies and use them as they see fit, so I tried to mechanize that and make it fairly simple. Then I added some higher level stuff like Venom-style body mutations to give it some depth.

Symbiote
You are an alien parasite that controls bodies. Your true form is a small worm-like blob of viscous material. Unless in a host body, you have no hands, cannot wear armor, and move at a base speed of 10ft per round.
Notes: I figured this class should probably have some downsides, so the parasite is incredibly fragile outside of a host. They should want to keep their host alive until they can find a new one.

Hijack
To attach to a new host body the creature must either be willing, unconscious, or restrained in such a way that you can enter their body through an open cavity, and cannot have a number of HD greater than the HD of your current body+1. The new host body can make a save to avoid being controlled, but will take 1d6 damage on a failure. If the strain of the process does not outright kill them, you now have a new host and can use their physical body as if it were your own. Use the host’s physical stats (STR, DEX, CON) and their HP and equipment. While attached to a host your presence is only apparent as a small pulsating black wart at the base of their neck, right between the shoulder. If your host is killed, save or die from the system shock feedback. You don’t have complete control, however, as any action that you command that would be obviously suicidal provokes a morale check from the host. On a success they can make a save to break free.
Notes: The actual mechanics for hijacking a new body ended up being a little complex, but I wanted to put some limiters on it because otherwise it's essentially a free mind control spell. It manages to break some of the limiters later on, but this means a level 1 parasite isn't completely OP.


Adapt
By mutating the host body’s natural form, you can make some improvements to their biology and apply one of the following adaptations to them. This takes a week of downtime to recover from the warped body, and permanently lowers the host’s HD by 1. If this would reduce a host to 0 HD, use your own HP, as you are now a hybrid body. In this case you cannot eject from the host until after taking a week to remove the adaptation and restoring the host’s body. Each host body can only have one adaptation applied at a time.
Notes: As noted above, the adaptations list is mostly examples. Feel free to add more or remove some for your own parasite. They might be too powerful, as they haven't been tested yet, but I think they should match well with some of the higher-powered GLOG classes out there. Don't forget to accompany these mutations by horrible impossible folding of the host creature's anatomy.

Total Loyalty
Your hosts now have 12 morale while attached.
Notes: This is where the ability gets to be much more mind-control-like. I still feel like the host should have some level of agency, but at level 2 this is probably fine.

Simultaneous Adaptation
You can now apply a number of adaptations to your host body equal to the number of Parasite templates you have.
Notes: Load up that host with wings, bone scythes, and armored carapace and turn them into a total monster.

Fast Adaptation
You can apply or remove an adaptation in 1 action rather than 1 week.
Notes: I intend to probably tweak the numbers on adaptation time. I don't know how powerful they are yet, but I know I want this thing to be able to adapt itself on the fly at higher levels.

Master of Evolution
Create a new adaptation or choose an adaptation, that adaptation does not count against your adaptation limit
Notes: Allows the player some leeway in making this parasite their own by giving them a signature mutation. Something like Venom's black suit appearance would be cool here.

The Curious Collection of Colin Crowe

Skerples over at Coinsandscrolls is running a community project involving making carriages for a giant interdimensional train megadungeon and I've decided to participate because I've never really done something like this before, and the limited size of the map looked pretty easy to work with. Plus, it gave me a great excuse to learn GIMP finally because I'd been putting that off for ages. So I downloaded the templates and got to work. After many hours of swearing at pixels, accidentally deleting my entire image, and finally learning how to draw a straight line, I present The Curious Collection of Colin Crowe.

I'm pretty happy with how it turned out, and I'm probably going to make another one soon if I can work it into my schedule. Currently bouncing around in my head is a car with a giant kraken god in it, ala China Mieville's Kraken, and a natural greenhouse car.

Posted by Isaak Hill at 9:20 AM No comments:

Events:
- The party took a quick backtrack to check out the exit to the dungeon, picking up two new adventurers along the way (50 xp)
- After resting for the night, the party descends the floating platform into a massive arena with a giant crystal in the center. (50 xp)
- BOSS FIGHT (50 xp)
- The crystal began to hum with energy as the party grew near, and runes began to appear on it and the ground. (50 xp)
- Ruck fired a laser at the crystal from the floating platform, removing one of its defensive shields as clay warriors began to pour into the room from one of the doors. (50 xp)
- Through a variety of clever combat tricks and quick analysis of exploding runes the party managed to clear all three phases of the boss, causing the crystal to explode! (50 xp)
- Out of the crystal emerged 5 dragons, who flew off through the roof of the dungeon. One of the party managed to catch a glance at one of their faces, which consisted of a single rune and no facial features. (50 xp)
- Packing up the loot they'd acquired, the party returned to the surface and to safety (50 xp) 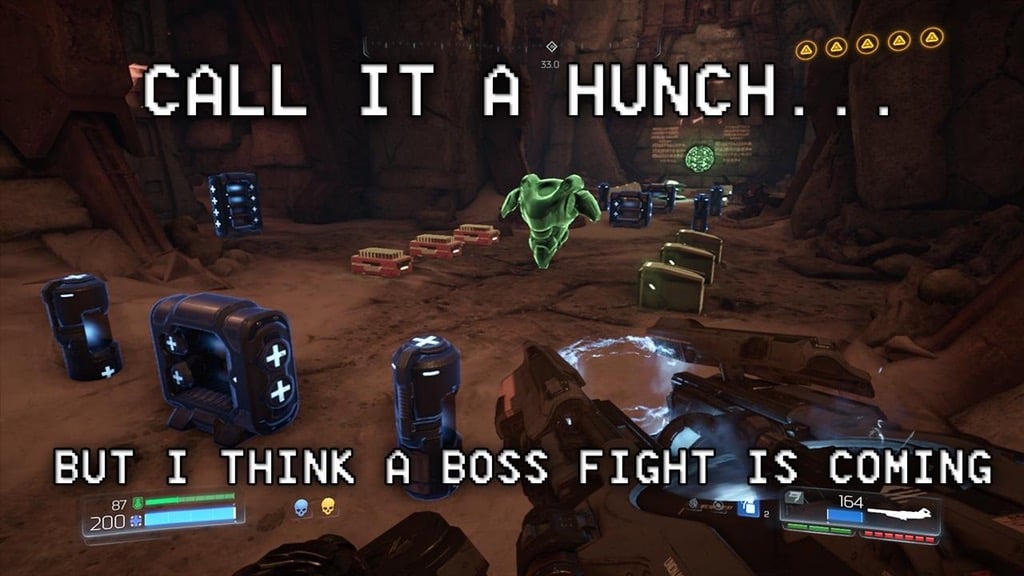 Events:
- Beginning in the rune dungeon, party members tested out some new rune combinations for a while before delving deeper (50 xp)
- Rowan's shield was ornamented with some useful rune combinations for combat later (50 xp)
- Chitter created an enlarging rune to enhance combat potential (50 xp)
- The party wandered into a room with a broken mosaic design destroyed by the same machine that cut a path through the previous room. (50 xp)
- Continuing to the next room, they found a pool built into the next room, inhabited by some wave elementals. In the bottom of the pool was a disc with a change mass rune on it, which when powered sucked all the water out of the pool, taking the elementals with it (50 xp)
- The next room contained some chests with loot, but not much else. Going the other direction they found a kitchen with some fancy runic kitchenware. (50 xp)
- Both rooms were looted, and the party continued upwards to a room split in half by a large chasm, with space provided for drawing runes and fire elementals on the other side. (50 xp)
- While the fire elementals were dispatched with an ice rune, the chasm was crossed with a huge rock beam rune (50 xp)
- Continuing out of the room with the chasm, the party entered the first door on their left and were confronted with four classic adventuring classes as statues, frozen in fear at the massive ruby on a pedestal in the middle of the room. (50 xp)
- Understandably wary, the party checked the room carefully for traps, and found only fake traps that sounded dangerous but didn't do anything. They left with the ruby suffering no injuries. (50 xp)
- The next left contained a room with very deep pits. In reality, the two acted as portals, and were fiddled with for a while using a zeno's arrow. (50 xp)
- The last door in the hallway opened onto a room full of weird skeleton spawners, and a light system to disable them using a repel light rune.  (50 xp)
- After bypassing the room easily, Baral spotted a secret door at the end of the next hallway, and found a lab full of mysterious potions behind it. (50 xp)
- The hallway went around another corner and opened onto a massive open room. In the center of the room, clay homunculi chanted and prayed to a massive hulking clay figure bathing in the center of the room. (50 xp)
- These clay minions were made short work of with a combination of take water and make heat runes. The big guy exploded into clay everywhere. (50 xp)
- A door to the left contained some more clay minions which were easily dealt with, and a trapdoor in the bottom of the room led to a large central room. The floor contained a floating platform blocked by three layers of shields, and a platform that could fire lasers at the shields. (50 xp)
- The party got rid of a couple layers of shields, but realized that they needed more than the laser platform. (50 xp)
- Exploring the surrounding rooms, the party found some more lasers, with various associated puzzles to aim them at the shields, and unlocked the way down to what looked like a huge arena. (50 xp)
- Checking out the last room, the party found an obvious start to the boss fight below, with a safe place to rest containing soft beds and cleaning runes. (50 xp)
- All that was left was to rest up, shatter the crystal below, and return rune magic to the world above (50 xp)